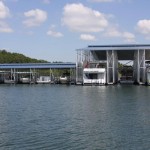 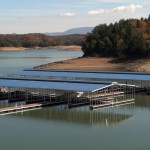 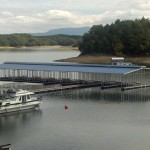 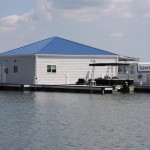 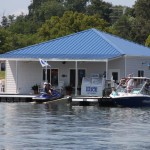 Mountain Cove Marina on Douglas Lake in Sevierville, Tennessee chose Wahoo Marine to rebuild their docks and ship store after they were destroyed by a 2011 storm.

The covered boat slip docks each have a vented gable roof to keep the slips cooler, offset the wind load, and offer an attractive look.

The ship store is located on a 55′ x 55′ platform dock. The store sits on concrete, with ironwood decking covering the platform around it. It is attached to a 75′ long pontoon-style pier, also decked in ironwood, which connects the store to the houseboat dock.

The houseboat dock is a 79′ fishbone-style dock with 6 large boat slips that are each 70′ deep for large houseboats. The dock has an extra-high 24′ roof, in Regal Blue.